The best time to travel is from Thursday – Sunday! Then you can participate in Saturday’s individual city tour at no additional cost. Every Saturday (*) there are complimentary city tours! (excluding entry fees!)

Istanbul is a city that is famous for its historical monuments and enchanting natural beauty as a major metropolis because of its geographical location in the center of the ancient world. With a population of approximately 16 million, Istanbul is the largest city in Turkey. It is also the only city in the world that spans two continents because the territory is separated by a strait, the “Bosphorus”. The city has a 2500-year-old, very eventful and colourful history. For almost 1600 years, Istanbul was seen as the capital by the Romans, Byzantine and the Turkish-Ottoman Empire. Here reigned over 120 emperors and sultans. Even after Ankara was declared the capital, Istanbul lost none of its importance. This unique city has to this day maintained its glamorous look and continued its vibrancy.

In our supporting program, you can visit these other attractions: 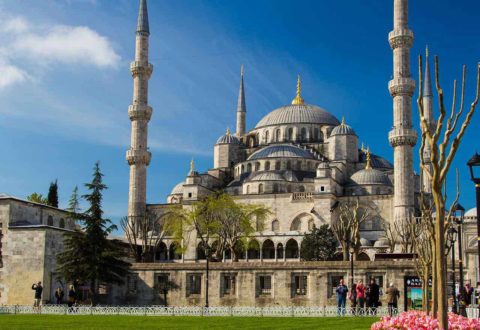 Those who have visited Istanbul at least once will never forget the feeling of wonder and admiration that gripped them when they stood for the first time in front of the Blue Mosque: the slender minarets that rise boldly to the sky, its enormous size, the cascade of domes, the amazing softness of their colours and shapes. From the Galata Bridge or the Golden Horn the view is unique.

Sultan Ahmet Mosque, Blue Mosque is the only one in the world that has six minarets. Its construction was commissioned by the devout Sultan Ahmet I., who ascended to the throne as a 14-year-old Mehmet Aga, a pupil of the great Sinan. They called him “Sedefkar” which means “pearl arranger”. Work on this mosque began in 1609 and was completed in 1616, just one year before the death of the sultan, who had spent 1,181 gold coins on it. It was tradition that Ahmet I as a sign of humility wore a hat in the shape of the foot of the Prophet on the day of inauguration. The first thing that strikes you when you go towards the Mosque is that this is the only one in the world which has six minarets, four of which have three whorls, a total of sixteen. When the mosque was completed, the Sultan had to build a seventh minaret for the mosque in Mecca, which also had six minarets, to restore its religious supremacy. 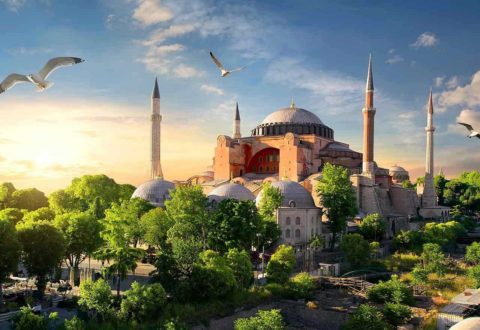 The first church was built between 325-360 under Constantine II. Although his father Constantine I may have already laid the foundations. After it was destroyed by a fire in 404, Theodosius II rebuilt and re-inaugurated it, but it fell again in 532, during the Nika revolt, again the victim of a fire.

This happened in the early years of Justinian’s reign and the emperor, who was chosen by God, was a strict defender of Christian orthodoxy and he had set himself the goal of building the largest church in Christendom. Barely 32 days after the destruction of the church work began with the reconstruction: it is reported that the shape of the church was created like in Justinian’s dream. On 27th December 537, the Hagia Sophia was inaugurated by the emperor. It is said that when Justinian arrived at the church, he raised his arms to heaven and cried out: “Blessed be God who has chosen me to lead such a great work to an end. Oh Solomon, I have surpassed thee! “In fact, the Hagia Sophia Solomon’s Temple in its proportions, beauty and wealth seemed to excel. On 19th May 1453 Konstantinopel was conquered by the Ottoman Turks. In the late afternoon of the same day Fatih Sultan Mehmet entered the Hagia Sophia and after nine centuries of Christian worship echoed for the first time the prayer of the muezzin from the mighty domes. The conversion of the Hagia Sophia into a mosque was carried out with incredible respect, even if, of course, numerous changes have been made: the metal cross in the dome was replaced by a crescent, it was reported that a half century spear with 50.000 melted down gold coins had been uncovered; instead of an Ambon, a pulpit was built as well as a mihrab for prayer towards Mecca. The 20th century began with the decline of the Ottoman Empire and it became the young Turkish Republic. Its first president, Mustafa Kemal Ataturk, decided to convert the mosque in the Byzantine-Ottoman Museum and in April 1932 he began to put the mosaics on public display. 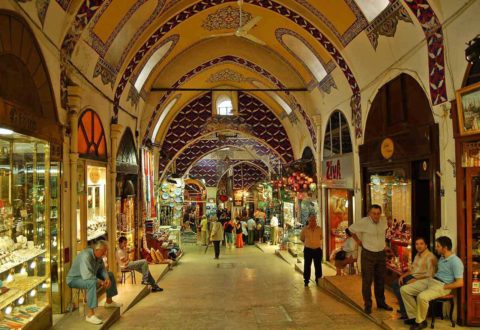 Gold, rich fabrics, leather, carpets, shoes, bags, watches, silver jewelry, books and antiques – you can find everything in the Grand Bazaar in Istanbul. Even if the dealers are increasingly offering more and more goods that are particularly popular with tourists, it still exudes a historical atmosphere. The first roofed halls date from the time of Mehmet the Conqueror.

Over the years, the bazaar has grown to become the largest and oldest covered market in the world. The products are exhibited over 20,000 square meters. There are some 4,000 shops, 61 streets and 18 gates. 20,000 people earn their livelihood here. Outside you can still find craft shops and hostels, but their presence is decreasing. The people of Istanbul rarely shop here; they buy their goods in the small streets towards the north or the Egyptian Bazaar in the Eminönü district. 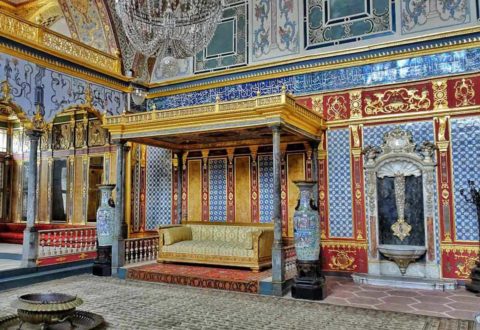 The Topkapı Palace, is a now a museum, it was a city within a city. The Sultan lived there with his ministers and staff. Sultan Mehmet II was allowed to build it in 1478 to manage the politics of the Ottoman Empire. Approximately 4,000 employees lived here; many more were added daily to carry out their work in the palace.

The women’s quarters, the harem, was built in the 16th century. The palace, which is surrounded by a five-kilometre wall, is divided into four courtyards, which had different functions: the elite troops of the sultan, the Janissaries had an exercise area, there was a hospital, stables, the building of the Minister and finally the private rooms of the ruler, which was inaccessible to outsiders. In the mid-19th century, Sultan Abdümecit built a new palace, the Dolmabahce Palace, on the banks of the Bosporus. 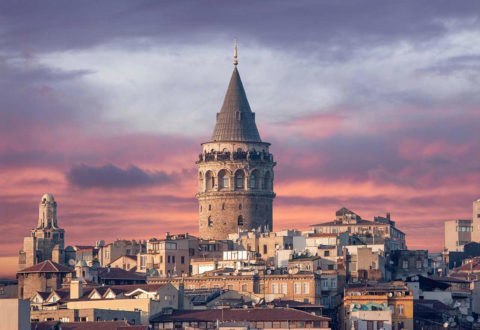 The former Greek Pera district, now known as Beyoğlu, is the center of nightlife in Istanbul. Cafés and restaurants follow one after the other, and there is something to discover and listen to everywhere. In Beyoğlu you can find the live music scene in Istanbul, world music in the truest sense of the word: There is classical Turkish music as well as Western, Greek or Jewish music.

Istanbul is a young city with a very young population. In recent years, it has therefore drawn more and more young tourists here, who are attracted to the lively city. In Beyoğlu, you do not want to sleep, because there are plenty of bars that are open all night as well as nightclubs. If that’s a bit too much, then go to the southern part of the neighbourhood, where life is more tranquil and visit the quieter places such as Kadıköy district or Ortaköy.

And With Very Nice Weather, We Always Offer a Bosporus Tour 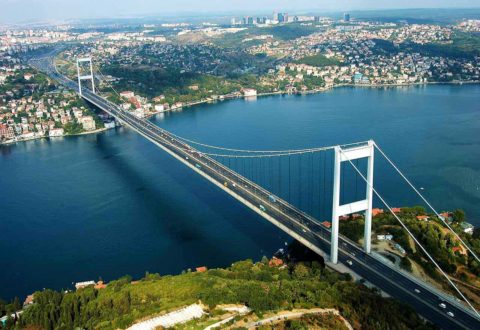 You can visit the harbour for about 4 hours. Go on boat trips on the unforgettable Bosphorus Tour, So that you have a beautiful view over the whole of Istanbul. For group appointments, your Bosporus tour is included in your package!

If you need a city guide on another day there is also no problem. We will gladly provide you with our English language support employee at a small additional price, between 10:00 – 18:00.